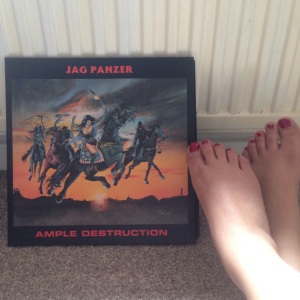 I’ve been a little blue. Lately, I’ve just been feeling so… heavy. Now this must in part be attributed to the fact that I haven’t been to the gym for a month, due to an unexpected and, frankly, debilitating bout of back pain, made worse by the fact that, adding insult to injury, my gym insist on sending out an email, reminding you of just how long it’s been since your last visit, and is there anything they can do to make you come back sooner? Urgh.

But – heavy, also in my heart and mind. A general lack of motivation, the inability to do much more than sit around eating pudding in my pyjamas. Pathologically pathetic, I know. It’s been bad – and not for lack of trying to cheer myself up, either! But I knew things were dismal when even Katy Perry couldn’t bring me out of my funk. That’s when I brought out the big guns.

Ample Destruction is always just the right dose of pure vitriol I need to get back on my feet, and this occasion was no different. From that first, dirty run into Licensed to Kill, I had already started to feel better, and midway through Warfare I could almost feel the bones of my enemies crunching under my fluffy slippers.

I love how some of these songs just explode into the vocals, with almost no warning – so few bands can pull that off, and Harry Conklin is the perfect man for the job. Comparisons to Dickinson are far from flippant, certainly in terms of ability, but Conklin explores the same vocal range from a completely different perspective – less dramatic, more aggressive, and screams to make your toes curl.

Harder than Steel has to be one of the best pick-me-up songs ever written. This ain’t no Walkin’ on Sunshine, but damn does it do the job. Joe Tafolla and Mark Briody play those guitars off each other like two expert swordsmen. And by the end of Side A, I was feeling Generally Hostile too.

Resisting the urge to run around the house, breaking stuff in a crazed rage, screaming ‘No mercy!’, I moved on to side B. Oh how I feel for the uninitiated that might start here. Despite the rat-a-tat of the drum-intro, executed with military precision, The Watching loses some of the antagonistic pace of the record (although I still think it retains all of the malice). So you could be caught completely unawares by the badassery of my favourite track off this one – Reign of the Tyrants. I can’t honestly remember the first time I listened to this record, but I remember the feeling I had when I first heard that fade-in, that feeling that makes you sit bolt upright, gesticulating wildly at everyone to shut up, because you know you’re going to hear something that will change you.

And as the haunting harmonies of the funereal intro to The Crucifix filled my ears, Conklin’s voice clear as a choirboy’s, I felt a sense of purpose again. The opus raged on, into that beautiful solo, finally ending in the tolling of the death knell, and, after weeks, I felt oddly at peace.

So. No more sitting around in my granny-pants, sucking crisp-dust off my fingers. Time to get off my backside, slap some nail-varnish on, and give this Monday some serious hell, because, dammit, I am harder than steel!